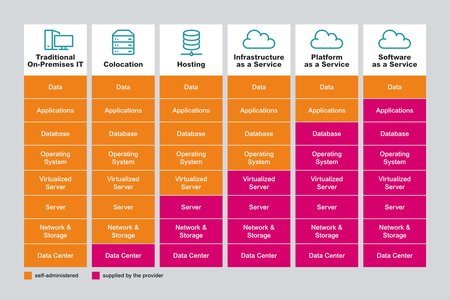 By: Lena Schneider and Stefan Theis

Even though the majority of our customers continue to operate in the classic on-premises world, the subject of the cloud is cropping up more and more. But how do cloud and on-premises systems differ? How many SAP S/4HANA cloud models are there? And is it possible to use our solutions in every version? All this is explored in more detail in this three-part blog series "Light in the Dark of the Cloud". The first part focuses on showing the differences between classic on-premises IT and the cloud.

To move to the cloud or not to move to the cloud – this is one of the key questions that is also coming up more and more frequently with regard to the SAP S/4HANA system. When researching on the internet, you often come across tables like the one below, which provide the first important insights into the differences between on-premises systems and the cloud.

The table shows all components that are required to run an SAP S/4HANA system. Each column begins with the data center where the infrastructure is installed. Then it moves on to the hardware, i.e. the servers that provide the computing and storage capacities. The path then leads to the software area; starting with the virtualized servers, to the operating system and database software, and finally the application (S/4HANA). An application is basically anything that can be called up. These include SAP reports, transactions or FIORI applications, but also customer-specific Z developments. Each column is completed with the data area. This includes the entire database content such as master and machine data, documents and parts lists.

In the left column, you’re in the classic on-premises IT, where all components are run locally on-site in the data center. In the S/4HANA environment, we also talk about purchase licenses at this point. The further you move to the right, the more likely you are heading toward the cloud. More and more elements are handed over in the process and provided by cloud computing providers. From the user’s point of view, the Software as a Service (SaaS) level is the final stage of the cloud, where you only own your own data. These are rental licenses.

Where does the cloud start and where does it end?

The cloud is not an invention that suddenly appeared, but a technological evolution. So unless you want to go deep into the technology, it is difficult to classify whether it is still a traditional infrastructure or already a cloud infrastructure. The rent we just mentioned can be a first indication.

In the cloud environment, the term “as a service” often appears in this context, which is representative of the fact that a service is merely consumed. The word placed in front of it ultimately indicates up to which level of the table it is used.

- Platform as a Service: Consuming the runtime environment for custom developments

- Software as a Service: Consuming all components below your own data

However, rent alone is not the deciding factor for cloud computing. Another significant buzzword is scaling, i.e., expanding the available computing power. We are already familiar with the term scaling from the classic R3 environment, when it is a matter of distributing the load of user queries toward the database by setting up several application servers. However, scaling in the cloud environment does not mean setting up 5 to 20 application servers, but a network of different computers consisting of 1000 or more servers. It is not without reason that cloud computing providers are also called hyperscalers.

This has the advantage of providing unlimited capacity on-demand, in line with the current needs. On the other hand, in the cloud context it is necessary to move away from ownership thinking. You can no longer say: “This server is mine”. Instead, the components used are shared with other customers.

But these are by no means all the advantages and disadvantages of moving to the cloud. You can read more about this in the second part of the blog series.